Open for Business | Part 3: Why Aberdeen

Starting a brand design agency: With ambitions of escaping to the Scottish highlands for a picturesque work and life retreat, we started scouting the Northeast of Scotland to find somewhere deep in the wilderness surrounded by snow, deer, and maybe the odd bear or two. 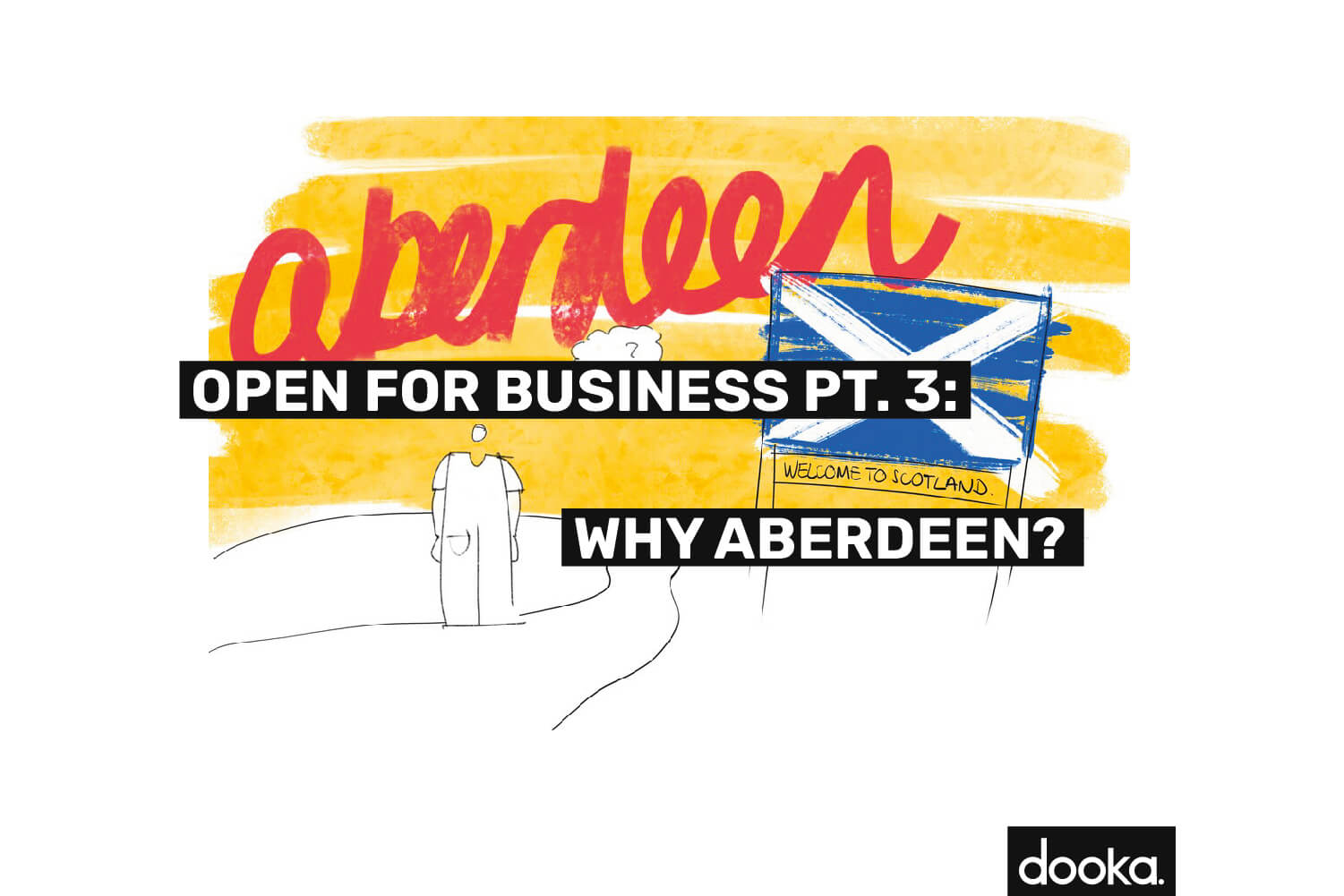 So, where were we? This diary was intended to be a living breathing account of how we were building the business, in almost real time. However, things happen, and I now find myself in the unique position of trying to remember exactly what it was I was writing about in the first place. The immediate feelings and emotions of the time are now memories, but the personal development and changes in perspective are all now a new lens to look on past experiences, so it’s all good.

(And if anyone reading this ever needed an excuse to justify waiting 6 months to post something, please feel free to take this verbatim.) Anyway, as I was saying…

In the thick of it

The completion and subsequent launch of the Pangolin Gin project was a defining moment for us. It gave us the all important green light to move forward with the dooka dream. We had proof of concept, a portfolio piece to share, and the motivation to get on and do it. It was now high time to look at exactly what that forward step looked like.

For lack of a better term, we rinsed the project for all it was worth, and understandably so; it was, after all, “all we had”. We could see the potential this project showcased, it covered a lot of turf and highlighted everything we wanted Dooka to stand for.

We had various individual freelance projects that we were using in the early days, all of which looked nice, but lacked the distinction we were trying to create. Pangolin Gin solved this problem. When pitching dooka as a potential agency choice, Pangolin Gin communicated our cohort in a way which summarised our collective skills in one single water tight project.

Shortly after having these conversations and agreeing that we would aim forward and not back, we removed all of our individual work from our website, meaning any and all work that was under the dooka banner was just that.

The beauty of using Pangolin Gin to market ourselves was that it made it very easy to talk about our level of involvement. It’s a lot less ‘sparkly’ when cherry picking pieces of work from a project that other parties have also been involved in. A blanket, ‘we did all of it’ was both easier to articulate and people could themselves cherry pick from that the services they might want our help with.

It served us well, and this led to a few more “cherry picked” parts of projects which we could get stuck into, further improving our process and tightening up our act.

We were as a result getting more interest, but suddenly we had far less time on our hands. At our absolute bottleneck, we had more projects than we had ever had, and only one person fully on project dooka. This led to many-a-double headers of the 9-5 daily grind supplemented with the 5-9 and beyond. Hellish at the time, but very fond memories in the wing mirrors of retrospect.

As time pressed on the question: “what could we be getting out of this if we were putting in as much time and attention as we possibly could into dooka?” became more imperative to answer. It was always going to be a huge risk leaving our ‘comfortable’ day jobs, but surely with the way dooka was going, the additional hours would better be spent dooka-ing?

Even the initial inevitable financial hit we could reframe as an ‘investment’ in ourselves and feel less attached to our dwindling bank balances - with it actually being very little about the money and very much about the adventure (See: Frodo first leaving the Shire). So, we tied our speedos tight and proceeded to cannonball into the whirlpool.

But if we were taking this plunge - how could we make the most and really maximise our chances of getting this baby out of the shallow end? We wanted to get knee deep and really see how far this puppy could swim (and so concludes the swimming references).

Working from home around the country had both its benefits and its drawbacks. Individual ‘focus’ time was available in abundance, which helped in developing ideas in our own personal vacuums. Conversely, the feedback loop was huge! Everybody’s individual availability and daylight hours varied. Zoom was getting boring. It was very hot outside. More often than not the small seemingly insignificant, ‘yeah, I like that’ collaborative moments were lost, and more often than not, these were the key catalysts to get solutions moving forward at pace. With a focus on our own growth and self-sustenance, we decided we needed to be together during these embryonic times.

We set a criteria and embarked on finding a destination that was accessible, sensible, and appropriate for what we wanted to achieve. Given the current climate we had to stay in the UK, and collectively wanted to be somewhere remote enough  to be “away from it all” with the excitement of discovering somewhere new - something we’re always chasing as a company and as individuals.

With ambitions of escaping to the Scottish highlands for a picturesque work and life retreat, we started scouting the Northest of North Scotland to find somewhere deep in the wilderness surrounded by snow, deer, and maybe the odd bear or two. Somewhere we could really be alone with our ideas with no distractions. This foolish idea was hampered by the wifi speeds in the region's we targeted. The irony.

We finally settled on Aberdeen, or more precisely, Dyce. Close to the coast, remote, far from any reasonable distractions and a house big enough for 4 boys to be cooped up for 6 weeks without completely losing our millennial marbles.

A few messages back and forth, a quick wifi check and an unknown number of scotch’s later, one evening in September sometime, it was booked.

With all of the requirements met, a timeline set, and the package secured, we each gradually slipped out of our 9-5’s one by one, and just a week after the final so long had been said, we we’re on our way to Aberdeen.

The problem with business plans