The Rock For President?

If you've been living under a rock for the past month. You may have missed Dwayne "The Rock" Johnsons venture into the rap game. SPOILER - he sucks. I wrote this article to describe why his move is lame for more reasons than his terrible rapping prowess. 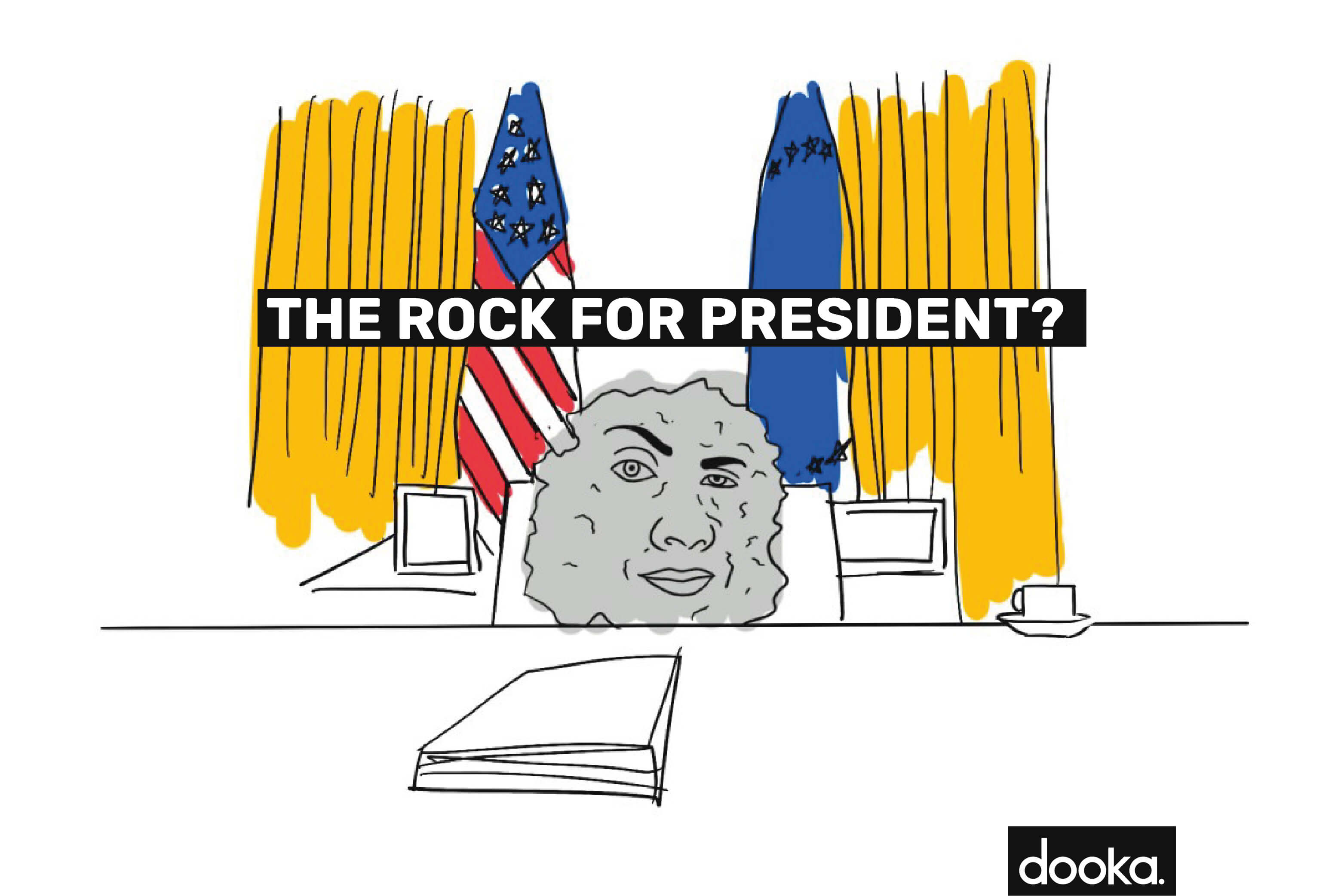 The rock is awful

He built up an agenda in wrestling - a ridiculously fake form of entertainment (sorry Rob) that still seems to attract the attention of grown adults. In retrospect, this “as a form of acting” he was pretty good at (alright, Rob?!). I had his action figure, he was my second favourite wrestler (after Rikishi). As a child.

He then moved into acting, which, as somewhat of a fan of cinema, I thought he was atrocious at. Despite better judgement, after several years in Hollywood blockbusters (featuring on average 46 smouldering looks originally known as “The Rock’s Eyebrow”), Dwayne is now positioned as the highest paid actor of all time.

He has now featured as part of the rap song - and yep you guessed it - it’s earbleedingly awful. (here’s a link if you haven’t seen/heard it yet: https://youtu.be/E9T78bT26sk - Dwayne is the last verse if you want to skip)

“Face Off” shot to the number 2 spot in rap in America within 24 hours of it’s release. Please listen to it and pay particular attention to the rock's diabolical verse that is buttwrenchingly cringe. There are many, many things wrong with this. But it is insightful for the progression of personal branding.

*He also uses the song as a shameless plug to sell his tequila brand, which admittedly, I’ve never tried, but I’m going to make a wild punt and say it’s probably overpriced lighter fluid.

^That's The Rolling Stones, The Rock band (two puns in one for you there)

This isn’t a particularly novel event, “celebrities” leaning on their infamy to sell more products in the eternal march of capitalism. But this one spoke to me in a different way. This is an example of a personal brand transcending professional careers. Specifically ones that are tragically inundated with talent from low economic backgrounds and crowded with aspirational dreamers who can’t get a look in. Not to mention the lofty incomes attached.

The rap scene started as a form of expression for underprivileged, Black communities. Once it was more widely distributed to the white suburban areas of America, it became viewed as an extremely rare opportunity to escape poverty and reach “the big time”. It crafted incredible musicians and shaped the music scene forever onward. As a fan of the art, I find it literally offensive that a person of such affluence can stumble onto the scene, metaphorically do a big fat deuce on a track, plug his own product and shoot up the charts. As a founder of a branding agency, specifically one working with personal brands, I find it incredible.

This single event highlights the influence that personal brands can have on consumer interpretation. Seemingly, at least in westernised mainstream media, audiences care less about output and are still in fact driven by celebrity influence and comfortability with familiar faces.

However, given the available social channels, there is a rising faction of smaller celebrities (if you want to call them influencers) and personal brands that have granted a platform to talented individuals. As industries and professions become more remote, independent siloed individuals and the importance of digital representation will become more readily accessible and substantially more important (See the rise of NFTs). It’s the role of the audience to be more specific in terms of what influences (or ers) they allow into their conscious stream and be selective about specialist talent. Not bending to the undoubtedly, very strong arm of Dwayne “The Rock” Johnson

*I have to state these aren’t the views of everyone at dooka, specifically Rob, who loves The Rock, Royal Rumble and Rap (apparently).

From Strategy-First to Social-First